Personality: Loyal and powerful. No tolerance towards other’s weaknesses. No pity towards pain or suffering. Bella cares of no one but her own self and her beliefs; would sacrifice her life for the cause of ridding earth of muggles and mudbloods. No one could master keeping so much hate inside of them without growing mad. Bella was no different. Instead of controlling her rage she nurtured it and loved every moment of her complete insanity. In addition to her sociopathic personality she was extremely smart in hiding it.

Bio: Bellatrix grew up in a family whose blood was as pure as fresh spring water and their minds were as clouded as skies on a stormy night. Blacks were well known for their determination and power as well as their strong will. Bellatrix was the eldest out of three sisters and as the hair had her responsibilities of learning how to manage the household and keep the family name. Her family status was everything to her. Their purity became her religion. It became her life.

Before School Years: If you ever tried looking for a girl, couple of places where you could certainly find her would be either the libraries or her father’s study. Not dolls interested her but the use of spells and experiments. From an early age she found herself being mesmerized by ancient venoms and human anatomy. Her parents were proud of her knowledge thinking that one day, Bellatrix would become one of the most praised Healers at St. Mungo’s. If only they knew how wrong they were.
Before joining Hogwarts, with the help of her tutors Bellatrix knew of every fiber in human body and how exactly it worked. She knew everything about human brain and physiological structure of nerves. She could list toxic material ever known to the wizarding kind and every antidote there was.

During School Years: The only memorable thing that she could recall was her trip to the muggle world. Singlehandedly she abducted 2 kids ages 5 and 12 and both of their parents. She held them prisoners for nearly a month before disposing of all 4 in fear of being discovered. That is where she mastered her unforgivable curses. She also tried her new venoms on the children exploring the bounds of parenthood. The torture of children in front of their parents was the favorite entertainment. Psychological torture was the only way to go.

After School Years: Joined Voldemort in his crusade against muggles and mugleborns dedicating her entire life to her master and god.  She ended up marrying Rodolfo Lestrange, but she had an affair with the Dark Lord because he wanted an heir.  And who better to volunteer to give him an heir than his most devout follower?  They named him Sebastian Riddle.  And Bella made sure that Bastian carried on the legacy that his father had created for him. 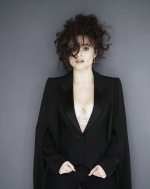 Hello Bella... you do know that my brother is obsessed with you, right?

Bellatrix... my father is very intrigued by you as well.  Personally, I think you're a complete bitch.

*laughs*  She definitely is.  But just because someone is a bitch doesn't mean they don't have talent.

You would defend her.

As much of a backhanded compliment that was, thank you Carrow.  You're far better than Slughorn.

I'm not exactly defending her; I'm just stating a fact of life.

All of you Slytherins are the same.  Defending each other for no good reason.

And the rest of you lost are the same:  always assuming the worst in us.

you haven't given us reason to see anything else.

*smirks slightly*  I don't think she was talking about herself... how could she?  with everything she's done... she's proud of it.  Not trying to hide anything.

*scoffs*  Unfortunately she is as evil as they say.

*smirks*  Like I care what others think of me?  Please.

Perhaps you should care.

You are speaking to Lestrange... you should know your audience, Slughorn.