I was sitting in the Great Hall with Ian, having some lunch.  I knew others were not too pleased that I still hung out with him after everything he had done.  But, whether people chose to believe it or not, he did change quite a bit.  He admitted that he was a moron and that he would never do something like that again.  I was not too sure how I felt about it, but I wouljd give him teh benefit of the doubt.  I sat there having a conversation with him -- one I did not necessarily enjoy.  He was debating what was going on with Uncle Remus.  He always hated the Lupins.  I wished that he would just shut up -- I was getting an aching headache.  I knew what this was going to lead into.  I closed my eyes and clenched my jaw, preparing myself for the long haul of what was to come.

It was a forest somewhere... it was dark.  It felt as if I were walking as an invisible observer, much unlike so many other visions.  This was how I knew it was happening now rather than in the future.  It always stunned me that I could see in these visions.  I walked along and snarling animals made me turn towards the path not taken.  I knew this was the way that I had to go to see what needed to be seen.  I kept walking and stayed in the shadows.  I saw Uncle Remus with someone I had never seen before.  Whatever they were saying, I was too far away from hearing.  It was clear they were both werewolves -- they were changing.  It made me look up at the sky and realized that it was not a full moon -- it was actually waning.  But that meant they were in control in a manner of speaking but could still change into their wolves if they could handle it.


I stood there, watching them change, and they started to fight.  Blood was going everywhere -- the stench filled my nose.  I saw that Uncle Remus was not doing too well against this beast.  I had been relieved to see that he was alright and alive at first... but then it came to me that the reason I was seeing that was due to the fact that something bad was going to happen.  There was a blow that made Uncle Remus fly across the forest and into a tree, knocking the tree out of the ground.  He ended up changing back into his human form after that and it caused the other man to do the same.  I paid attention to his appearance so I could describe him when I needed to.  I watched, fear gripping my heart, as the man laughed at how feeble Uncle Remus looked.  I heard him say one last phrase:  "This is for my father."  And then he attacked.  Uncle Remus was on the ground, unmoving.  I started to come out of the shadows to see if he was okay and that was when the vision started to fade.  I knew better than to be more involved than just in the background -- but I had to see if he was okay.  All I heard was the man laughing... he just killed Uncle Remus...


I opened my eyes and realized that I was screaming teh word, "No!" I shut up and felt the stares of the other students.  I could hear their whispers.  Everyone always thought I was so weird.  I felt Dorian's hand underneath of my elbow to help me stand back up.  I was shaking badly.  "Ian... it's Uncle Remus... he's gone," I said, frantic.  I was not entirely sure why I was telling Dorian of all people, but I needed to find someone else to tell.  "I-I... I need to send word to Aunt Chloe and my grandparents and Aunt Lily and Uncle James," I said quickly.  I knew Dorian would leave me alone while I did waht I had to do.  I started to head out of the Great Hall and pulled out my wand.  I knew people would get out of my way as I stumbled along my own path, still shaky by what I had seen.  I sent word to everyone that was cloest to Uncle Remus that I saw him die... or something.  I needed help -- he needed help.

I had been gloating how happy I was that the Headmaster was finally gone.  He should never have been allowed to be involved in this school due to the fact that he was a werewolf.  I let Constantine leave after he told me what he had seen.  I smirked and had to go cause some damage with that lovely information.  I wound my way through the corridors and saw the happy couple in front of me.  I smirked and as I passed, said, "That smile will thankfully be wiped off of your face, Lupin.  I just heard that your good-for-nothing grandfather.  He finally got what he had coming." 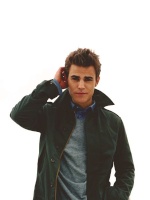 I was walking hand in hand with Ally and rolled my eyes at Malfoy as he approached.  it looked like he had just won the lottery.  I could easily ignore him but when he said what he did, Ally stopped and so did I.  I stared at him, trying to figure out exactly what he meant by that.  But I knew Ally would flip because he just insulted her grandfather whether he deserved it or not.

I stopped as I was hanging onto Josh's hand. " What?...what was that Malfoy?" I asked him as I knew he would turn back around. " You know he can't do anything to you...doesn't mean I won't have a problem beating your face in." I said as he had turned back to face us.

I stopped and spun around.  I presented myself as bored.  "Beat me if you want... but I am just glad that we'll be getting a new permanent headmaster after this news gets out.  one that will hopefully clear out the riff-raff like the lot of you," I said, looking to see the reaction of my words.

I lunged at him, " You won't be able to see once I'm done with you! Spoiled useless git!" I shouted as my fist made contact with the side of his face. It was a shame he was taller than me, I had to punch up. I landed a sucker punch on him though. I was happy when he staggered back.

I knew Ally was just getting infuriated.  But I was just wanting to get to the bottom of this.  I grabbed hold of my girlfriend and pulled her back.  What was he getting at?  "Wait... Malfoy, what are you going on about?" I asked.  I felt like he was implying that Professor Lupin was dead... how did Malfoy know anything?  No one has heard from him in quite some time.

I staggered back and rubbed my jaw when Weasley tore his little brat off of me.  I still had a smirk on my face though.  "Oh, now you want to know the details?  I'm not sure if you deserve to know now," I said, shrugging and starting to back away.

I felt like a caged animal. I wanted to rip Malfoy apart. Josh should know he says something else about my grandpa I will tear him a new one. " What was it about Malfoy?" I asked as I paced behind josh. He better say something fast.

I knew that I had to attempt to keep Ally from doing something she would regret.  Even if it was beating up Malfoy, if she did more than that, she would not be able to live with that.  I stayed at the ready because whatever came out of Malfoy's mouth next would decide what Alysha would end up doing.

"Okay, I suppose I can tell you.  It is hard to keep from spreading good news," I said snidely.  I loved causing as much pain as I could.  And as nonchalantly as stating the weather outside, I told them what I was getting at.  "Lupin's dead."  I did not say that Constantine saw it; he had not told everyone about his visions.  I was not entirely sure if he had told his own parents about them or not.

I moved to where I could keep Alysha from doing something to him.  I glared at him.  "And how do you know that?  Why should we believe you?" I asked, rolling my eyes.  I had to act like there was no truth to what he said, but something in the pit of my stomach told me otherwise.

I rolled my eyes.  They really were daft, weren't they?  I knew that I probably should not say how due to the fact that I was not entirely sure who all knew about Constantine, but then again... I did not really care at the moment.  I betrayed everyone in some way or another, it was called being a Slytherin.  "Because of Stan, of course.  You really are daft, Weasley..." I shook my head at him.  I could tell by the looks on their faces that they indeed did know of Stan's visions.  They knew I was right.

I knew he wouldn't be able to get that information on his own. " Well, then you truly know the truth now don't you Malfoy.." I snapped angrily. The idiot didn't know that you have to confirm these things with Stan. You talk to him and then we really find out it happened. Was my heart breaking thinking that my grandpa had indeed passed away. Of course. Was I going to show any other emotion besides anger. God no. " I'm going to find Stan." I told him as I needed to get info for myself. I knew once Josh was done with doing whatever he did to Malfoy he would come and find me. I rubbed my hand as it was starting to throb a bit from hitting Malfoy's jaw. I turned and left down the corridor.

I was panicking.  why was no one here yet?  I told them it was an emergency and it was about Uncle Remus.  I was pacing in the Entrance Hall, knowing that they had to enter from Hogsmeade.  I had tears in my eyes and I kept reliving what I had seen, only partially on purpose.  I did not want to forget what that man looked like... I did not want to forget any detail that might help locate where he was... precious time was ticking by.  There was so much blood... if he was not already gone... he very well could be by the time everyone got there.