Personality:  Jetty is mostly quiet and reserved.  He fears that he may end up just like his father and tries his best to prove that he is not.

Before School Years:  Jetty never got to meet his father as a child.  He had to grow up with his cursed name -- there were two different tales that were told of Pettigrew and Black, each one pinning the other as the hero/villain.  He had no idea which to believe, but he had his older sister to protect him and help keep people from treating him badly.  Jetty and Jada got along for the most part while they were younger, it was once he was in school that things became a little rocky, but only because they had to struggle with a secret he had to keep.

During School Years:  Before he boarded the train his first year at Hogwarts, Jetty's father revealed himself.  Jetty had to struggle with the fact that he wanted a relationship with the man he thought had died years ago and the fact that he did not want to be like that man.  He realized that his father was indeed a Death Eater.  At first, that was what Jetty thought he wanted.  He went so far as threatening Dean Black and harming Addison Logan.  He then realized that that was not the person he wanted to be once he found out that his father had been keeping James and Lily Potter captive for so many years.  Eventually, Dean and Jetty became best friends and all was forgiven.  He even helped in the freeing of the Potters.  His motives were questioned when Elena was captured, but once he got hte chance to explain that hte Death Eaters had also kidnapped him, he was back in the good graces of Dean.  He even helped Dean with his addiction problems while Sirius Black was in his coma.  During his last year of school, he started a relationship with Stephanie Moon.

After School Years:  When they had returned to the Battle of Hogwarts, Jetty lost Stephanie.  She died in battle.  Jetty's job -- being in the Department of Magical Creatures Misuse Division at the Ministry -- gave him the opportunity to be the Department Head in the States.  He had taken that opportunity due to running from the fact that he was unable to save Stephanie.  While adjusting to his new life in New York City, he met Madelyn Black -- yes, Dean's cousin and Regulus Black's daughter.  They seemed to hit it off rather quickly.  Jetty actually ended up marrying Lyn and they had a beautiful son, Rory.  When the Department Head at the England office retired, it gave Jetty the opportunity to move back home without taking a pay cut or anything like that.  After long discussions, Rory and Lyn agreed with Jetty to go to England.  Once they were home, they got Rory to be with Stan.  Jetty had heard about the incident with Dean and now he was finally able to help his friend more than he could from the States. 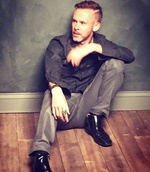 *shakes head*  This is ridiculous... does he need me to have a few words?

*laughs*  I'm not sure if that'll do any good

I know... it's ridiculous

It is what it is *sighs*

Evan!  Surprised to see you out and socializing...

*laughs*  That is only slightly insulting, Jetty.

*rolls eyes*  Thanks for tha, Jet.

I wouldn't be too sure he does, Jetty.

I think Stephanie is right.